The number of confirmed cases of coronavirus (COVID-19) in Nigeria has risen to 70, following the discovery of five new cases.

The Nigeria Centre for Disease Control (NCDC) confirmed the new figure in a tweet on Friday, in its latest update on the disease.

Unlike previous updates where Lagos has recorded at least one case, no new case of COVID-19 was confirmed in the state.

On the other hand, the Federal Capital Territory (FCT) which has trailed Lagos as the second worst-hit recorded three new cases while two were confirmed in Oyo State.

As of 8pm on March 27, the NCDC stressed that three cases have been discharged with only one death recorded.

Five new cases of #COVID19 have been reported in Nigeria: 3 in FCT & 2 in Oyo State 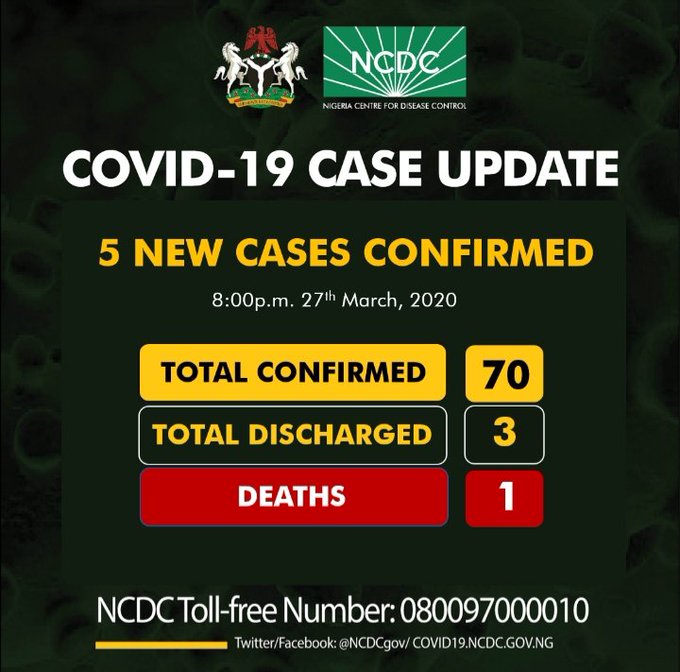 6,065 people are talking about this

Following the confirmation of the five new cases of coronavirus, Lagos has 44 while the FCT trails with 14 cases.

Ogun and Oyo States have three cases respectively and Bauchi has two, while Ekiti, Edo, Osun, and Rivers States have one confirmed case each.

He took the decision after his fiancée, Chioma, tested positive to coronavirus (COVID-19) shortly after she returned to the country.

Davido, who announced this on Friday via his verified Twitter handle, noted that he recently returned to Nigeria from America after cancelling his tour, while Chioma also came back from London with their baby.

He said although they had no symptoms and were perfectly fine, they decided to take the COVID-19 test on Wednesday along with the close associates they had recent contact with as a result of their travel history.

“Unfortunately, my fiancée’s result came back positive while all 31 others tested have come back negative, including our baby.

“We are, however, doing perfectly fine and she is even still yet to show any symptoms whatsoever,” Davido revealed.

Porting declines by 55% as subscribers opt for dual lines