The Nigeria Centre For Disease Control has confirmed 11 new COVID-19 cases in Lagos State, taking Nigeria’s total to 373 cases as of Tuesday, April 14, 2020.

Eleven new cases of #COVID19 have been reported in Lagos State.

Eleven new cases of #COVID19 have been reported in Lagos State.

As at 11:00 pm 14th April there are 373 confirmed cases of #COVID19 reported in Nigeria. 99 have been discharged with 11 deaths#TakeResponsibility 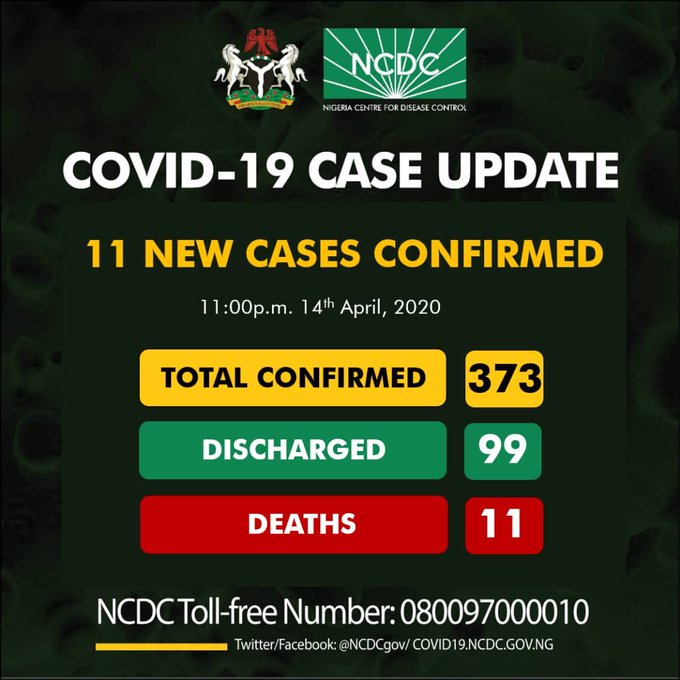 3,080 people are talking about this

The latest confirmation comes less than two hours after the NCDC confirmed 19, cases – 14 of them in Lagos, two in the Federal Capital Territory and one in each of Akwa Ibom, Edo and Kano states.

In all, it means the NCDC confirmed a total of 30 cases on Tuesday, 25 of them in Lagos State which is the epicentre of the pandemic in the country.

So far, 99 cases have been discharged in the country will 11 deaths recorded.

Several measures have been taken to battle the pandemic in the country with the Federal and state governments imposing movement restrictions and imposing lockdowns.

Schools and several other institutions have been shut and restrictions have been placed on large gatherings with social distancing laws in place in several states.

On Monday, President Muhammadu Buhari extended a lockdown in Lagos and Ogun State as well as the Federal Capital Territory by two weeks after an initial two-week lockdown, which he announced on March 29 expired.

In a nationwide broadcast, the President appealed to Nigerians to comply with the lockdown as it was essential to saving lives.

“The irresponsibility of a few can lead to the death of many,” the President warned.

With a lockdown in place, there have been humanitarian and security concerns, but the Federal Government says relief materials and cash transfers and other measures will help cushion the effects of the lockdown.

The Federal Government has approved the commencement of a 14-working-day paternity leave for federal civil servants. The Head of the