The Inspector-General of Police has rescinded an order restricting the movement of essential workers amid the COVID-19 lockdown.

Earlier on Tuesday, Channels Television reported on how essential workers were restricted from moving within Lagos at the beginning of the 8 pm curfew imposed to limit the spread of the COVID-19 virus.

According to security officials enforcing the order, health workers and journalists could not be allowed to move around after 8 pm.

However, in a statement late Tuesday, IGP Mohammed Adamu said essential workers can now go about their essential duties.

The virtual conference is the first by the Nigeria Police Force since the outbreak of the COVID-19 pandemic in the country.

All essential workers including Medical Personnel,Firefighters, Ambulance Services,Journalists,etc are exempted from the restriction of movement associated with both the partial lockdown and the national curfew across the Federation.

39 people are talking about this

The IGP directed all “Zonal Assistant Inspectors General of Police and Commands Commissioners of Police to give effect to these exemptions whilst enforcing the restriction orders.”

On Tuesday, the IGP held a virtual conference, the first of its kind, with “strategic managers” of the police force.

At the end of the meeting, the police decided to implement “strict enforcement of inter-state movement restriction orders” in order to help curb the spread of the virus.

Essential services can move interstate, “but that should be before 8 pm,” Commissioner of Police, Hakeem Odumosu, said on Tuesday. “Once it is 8 pm, it is a total lockdown. Whether essential services or not, interstate movement ceases by 8 pm.”

On Tuesday evening, the police restricted the movement of essential workers in Lagos. However, the Inspector General of Police, Mohammed Adamu, has rescinded the directive, ordering that essential workers be allowed to operate beyond curfew limitations.#COVID19#Lockdown 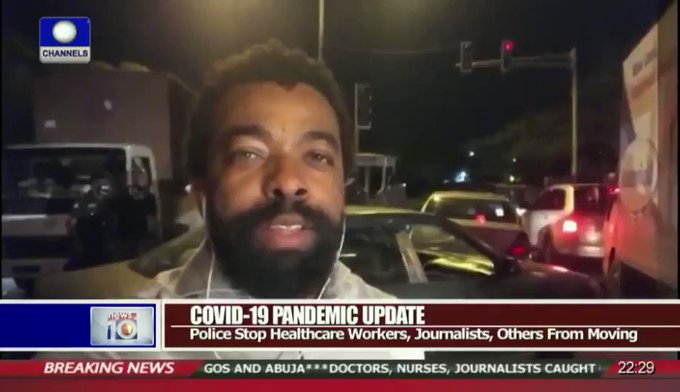 40 people are talking about this

For weeks, members of the Presidential Task Force (PTF) on COVID-19 have lamented noncompliance to social distancing measures, especially as the government sought to gradually reopen the economy.

“The PTF has been monitoring the level of compliance with some of the measures and early observations showed lack of compliance with social distancing and wearing of masks,” PTF Chairman, Boss Mustapha said on May 4, the day the federal government relaxed lockdown measures in Lagos and Abuja.

There were also numerous reports of people found in trucks attempting to cross state borders, despite a presidential order that placed a “ban on non-essential inter-state passenger travels until further notice.”

Interstate travel has been identified as one of the major means through which the virus is transmitted in Nigeria. For example, Bayelsa’s seventh case was a doctor who had traveled to Delta state.

The National Orientation Agency (NOA) blamed security agencies for not enforcing the restriction of interstate movement, claiming some officials were collecting gratification for free passage.

However, the police’s restriction of essential workers went against government policy since lockdown measures were initiated.

“Specific directives have been issued to security agencies to strictly enforce the measures,” Mustapha, who is also the Secretary to the Government of the Federation, said on Tuesday during a briefing.

“I, however, wish to assure our essential workers, such as the frontline medical personnel, the media . . . that they will be adequately protected; your obligation is to always carry a valid means of identification,” he added.

As it turned out, she didn’t have to wait long for answers. Minutes later, the IGP put out a statement affirming the need to guarantee the movement of essential workers beyond curfew limitations.

Our security approach has failed: FG, states must rejig – Labour