Nigeria has recorded an additional 348 COVID-19 cases, taking the total number of infections in the country to 11,166.

The Nigeria Center for Disease Control (NCDC) disclosed this late on Wednesday.

According to the agency’s report, 163 of the new cases were recorded in Lagos, 76 in the FCT and 23 in Ebonyi.

Other affected states were Rivers with 21 cases, Delta, Nasarawa and Niger with eight each, Enugu with six, five each in Bauchi, Edo, Ekiti, Ondo and Gombe, four in Benue, two in Ogun, and one each in Osun, Plateau, Kogi and Anambra.

A total of 3,329 have been discharged, while 315 deaths have been recorded. 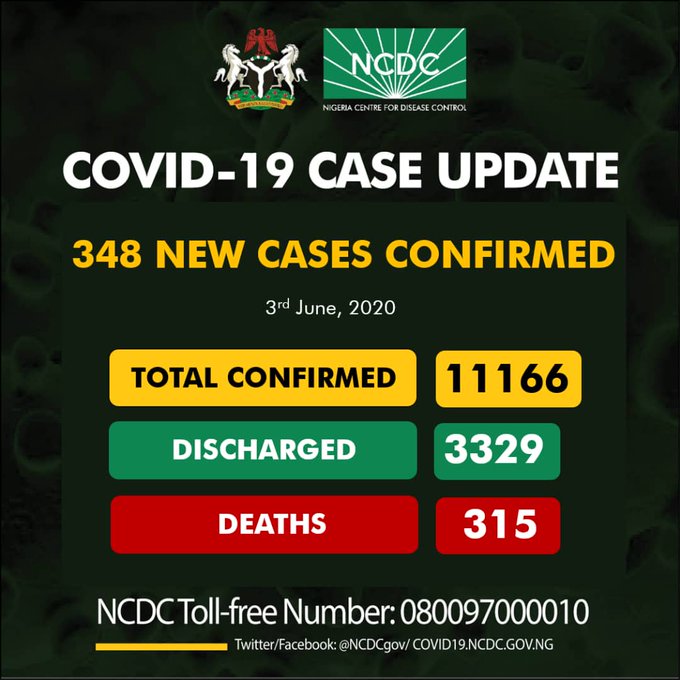 3,932 people are talking about this

Nigeria has continued to record new cases of the novel coronavirus, three months after the first case was recorded in the country.

With the soaring figures, Lagos has remained the epicenter with 5,440 cases, closely followed by Kano State which did not record any new cases today, maintaining its initial 970 cases and the FCT with 763 cases.

The latest figures put Nigeria as third on the list of most infected African nations after South Africa and Egypt.

To curb further spread of the virus, the Federal Government had imposed a lockdown on the three majorly affected states at the time (Lagos, Ogun State and the FCT).

Subsequently, other states began to impose varying degrees of curfews and governors eventually agreed on interstate lockdowns as they began to record new infections.

But weeks after the FG-Imposed lockdown, President Muhammadu Buhari announced again that there would be a gradual easing of the lockdown in order to allow economic activities resume as the country could not sustain an extended period of economic inactivity.

While essential workers and other levels of workers have been allowed to resume so far, the government has still appealed to those who can afford to stay at home, to do so.

Reducing interpersonal contacts and maintaining social distancing of up to 2-3meters is said to be one of the ways to curb the spread of the virus but that in itself has proven to be a difficult task for most Nigerians.

Other measures to stay safe include sneezing or coughing into your elbow, washing of hands regularly, use of alcohol-based sanitizers and wearing of face masks.

While most businesses have been allowed to resume with strict adherence to the above measures, schools, worship centers and other places of social gatherings remain shut.

The Presidential Task Force on COVID-19 on Tuesday said it does not recommend that people resume at places of worship, but if they have to, the task force will provide guidelines that would make it safe to do so.

In a set of guidelines later released by the PTF, places of worship were asked to comply with measures such as the mandatory use of face masks by worshippers, provision of hand washing spots at the entrances, use of hand sanitizers with at least sixty per cent alcohol content and mandatory temperature checks.

The PTF also mandated that facilities be structured in a way that physical distancing can be observed and as much as possible, congregants avoid activities such a hugging, shaking or kissing.

It also noted that church/mosque volunteers (ushers, choir, security etc) that have underlying illnesses should not be allowed to serve, while the time for worship services should not be more than one hour.

For schools, the government had stated last week that it is not ready to take the risk of resuming just yet.

The Minister of State for Education, Emeka Nwajiuba, debunked reports that schools would open on June 8, adding that there would be no resumption “until we are sure that these children can go to school, return safely and not bring home with them, this COVID material”.

NIS to commence e-registration of immigrants