Nigeria has recorded 338 new cases of the novel coronavirus, according to the Nigeria Centre for Disease Control.

In a tweet on its official handle late Sunday, the NCDC said Lagos had recorded 177 new cases, while Kano posted 64 cases.

Other regions with new cases include the FCT with 21, Rivers with 16, Plateau with 14, Oyo 11, Katsina nine, Jigawa and Kaduna with four each, and three cases from the trio of Abia, Bauchi, and Borno. 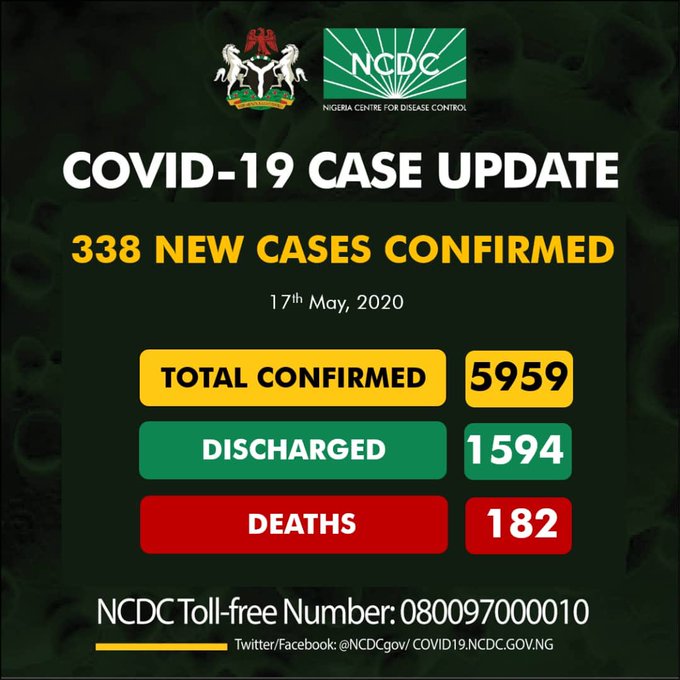 8,148 people are talking about this

Earlier on Sunday, national coordinator of the Presidential Task Force (PTF) on COVID-19, Sani Aliyu, said President Muhammadu Buhari is set to address Nigerians on Monday over the pandemic.

While some expect the President to further relax lockdown measures precipitated by the virus, COVID-19 cases have continued to rise across the country.

The novel coronavirus has killed at least 313,611 people since the outbreak first emerged in China last December, according to a tally from official sources compiled by AFP at 1900 GMT on Sunday.

Many countries are testing only the most serious cases.

Since Saturday 1900 GMT, Madagascar and Nepal have announced their first virus-related deaths.

Corrections by national authorities or late publication of data mean the figures updated over the past 24 hours might not correspond exactly to the previous day’s tallies.

Garlic, salt water will not protect against coronavirus- WHO

ABUJA, NIGERIA. September 18, 2020… The fight against corruption in Nigeria received a major boost yesterday as the Federal Government