The total infections for the country now stand at 7,526.

In a tweet via its official handle, the NCDC reported that 133 of the new cases were found in Lagos, 34 in Oyo, 28 in Edo, 22 in the FCT, six in Plateau, five in Kaduna, three each in Borno and Niger, and two each in Kwara, Bauchi, Anambra, and Enugu.

The number of deaths remained unchanged at 221 from Friday but the figures for successfully treated patients increased to 2,174. 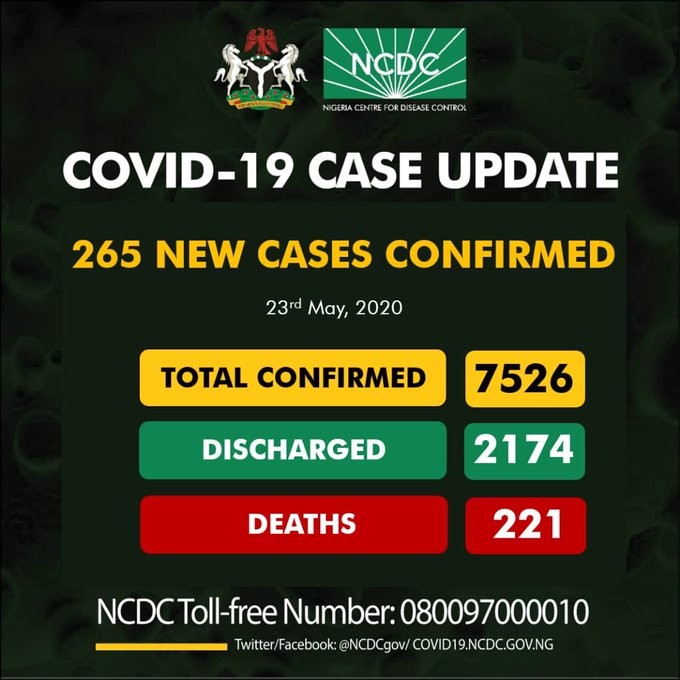 5,317 people are talking about this

Meanwhile, the global number of novel coronavirus cases has passed 5.25 million with more than 339,000 deaths, according to a tally from official sources compiled by AFP at 1900 GMT Saturday.

Since the outbreak first emerged in China in December, 5,260,970 cases have been recorded across 196 countries and territories, with 339,758 deaths attributed to the virus.

The latest figures mean recorded cases worldwide have doubled in a month, with 250,000 new cases recorded in less than three days.

Many countries are testing only symptomatic or the most serious cases.

The countries that registered the most deaths were Brazil with 1,001 followed by the United States with 989 and Mexico with 479.

Corrections by national authorities or late publication of data mean the figures updated over the past 24 hours may not correspond exactly to the previous day’s tallies.

Reps To Probe Legality Of Chinese Nationals In Nigeria For Repatriation

Buhari: Why I didn’t sack my ministers

After months of being shut down, the Lagos State Government has approved the full reopening of worship centres in the