Nigeria has recorded 20 new cases of coronavirus (COVID-19), bringing the total number of confirmed cases in the country to 210.

The Nigeria Centre for Disease Control (NCDC) revealed this in a tweet on Friday, hours after it confirmed six cases of coronavirus in Osun State.

Two new deaths have been recorded in Lagos and Edo State 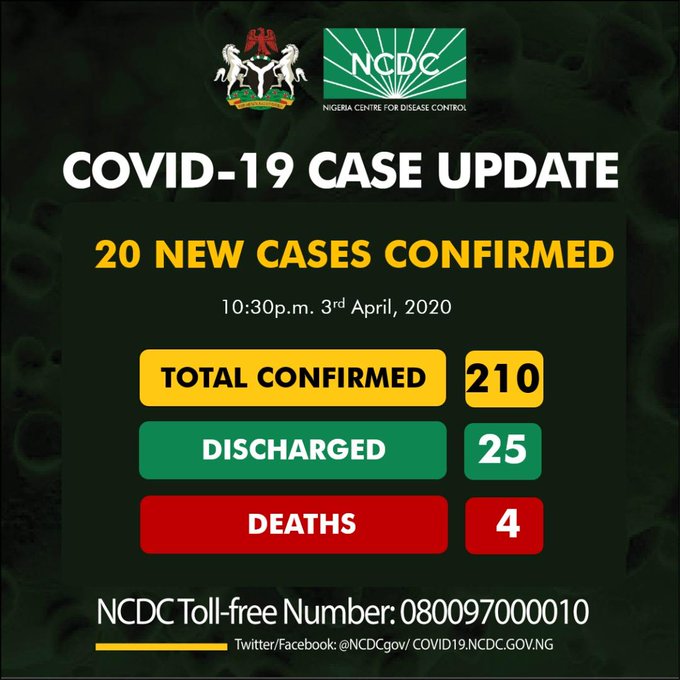 10.5K people are talking about this

A breakdown of the latest figure shows that 11 new COVID-19 cases were reported in Lagos, while three cases were confirmed in the Federal Capital Territory (FCT).

Three cases were also reported in Edo and two in Osun, while Ondo State recorded its index case of the disease.

Meanwhile, the number of people who have recovered from the disease in the country has risen to 25.

This followed the news that four people, including a mother and her baby, had been discharged from the Mainland Infectious Disease Hospital in Lagos.

On the sad note, the NCDC revealed that the death toll from COVID-19 in the country had doubled.

A total of four people have died from the disease, two new deaths were recorded in Lagos and Edo States.

See the case summary in Nigeria as of April 3 below:

G20 summit : Trump to hold meeting with China, Russia, Others

Former Head of State and Chairman of the National Peace Committee, Abdulsalami Abubakar on Wednesday said there are an estimated